anyhow… the moral of the story is dont listen to italians… also as i discovered their spedo’s smell pretty freakin bad when they take them out of their bags…. geeeeeeeeeez!!!!

anyway.. we are on Koh phi phi now.. the place is pretty messed up a little since the tsunami.. but its really cheap.. i guess they are still trying to get customers to come back to the place… we are going kayaking again today and gona go snorkaling… then prolly gonna relax and maybe go party.. apparently this place is ment to go off at night.. woooooo i love party’s…. curls up in a ball and cry’s….

anyway… 4 nights here.. this place is honestly alot beter than phuket… we are going back to phuket for 2 nights then flying over to the east cost… anyway yeh will quickly put up some photos.. like i said… this place is expensive for the net but everything else is dirt cheap..

OOOO this was in the tiger bar.. hehe awsome ay… oooo yeh.. get freaky mister tiger!!!! 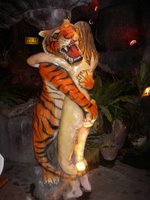 hehe one of the many monkeys at the budah cave… was kinda cool.. i pinched a bannana off some lady who was to scared to feed the monkey herself.. hehe they are so cute.. they start to squeek at you.. then they jump on you and claw your eyes out….. suckers.. they were damb supprised when they discovered i where glasses… poor giorgio though.. eh anyway.. so this is now a solo trip 😀

Ooo James bond island…. this thing is so small.. its a freakin rock next to a little tourist island.. hehe but still looked pretty cool….